Calamariolu.it was created to introduce you to one of the most beautiful corners of the Mediterranean sea. Cala Mariolu is a beach located in the Gulf of Orosei, on the central-eastern coast of Sardinia. We will show you the beauty of this small corner of land, its history and curiosities with photos and videos produced by us and shared by the visitors who spent here their holidays.

By sea
By land 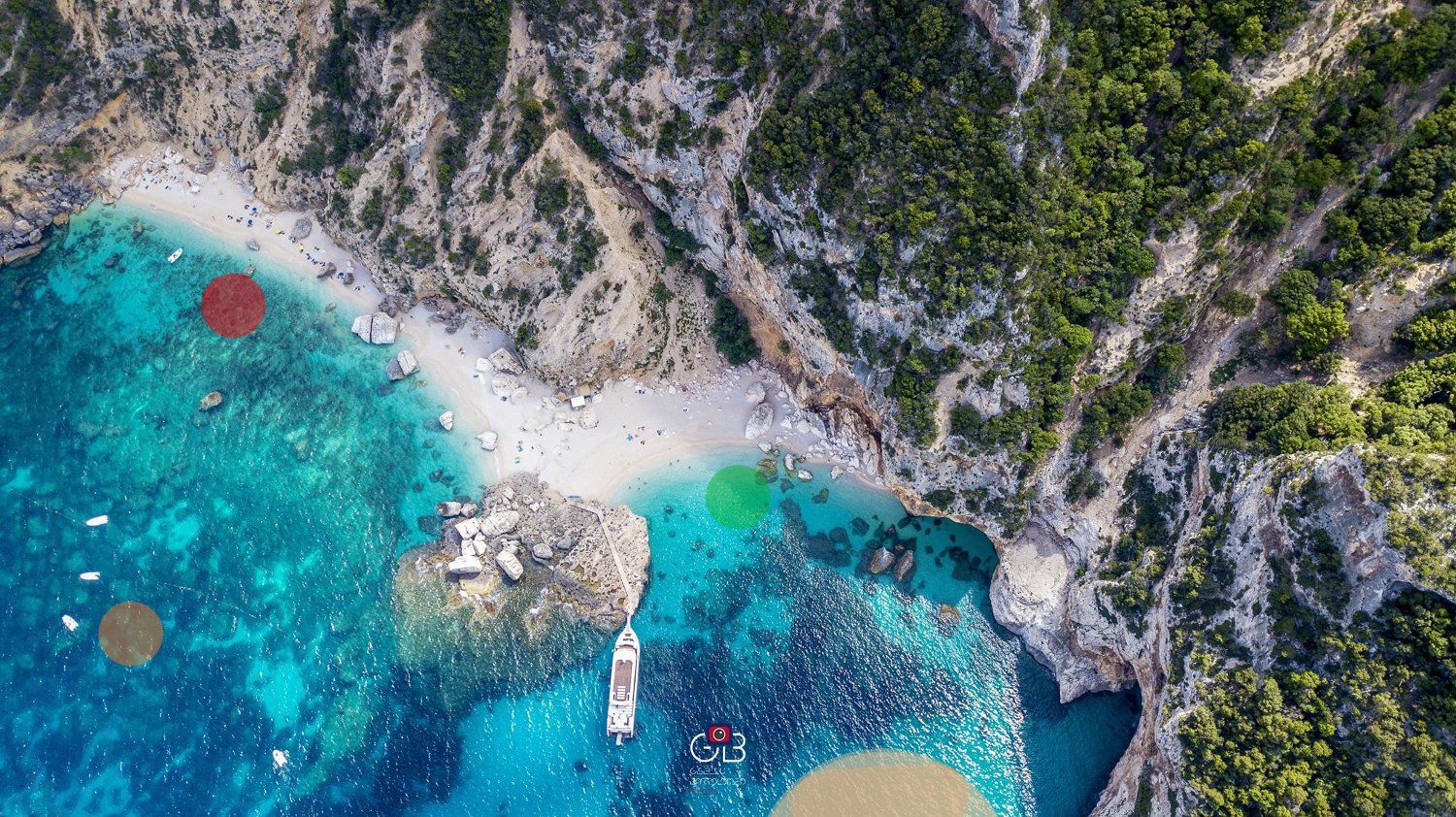 FOR THOSE WHO RENT A RUBBER BOAT - Approach the docking lane at 3 knots. On the beach you will find the staff of "Baunei Product Club" who will assist you.

One of the most beautiful dives of your life .. The natural aquarium of Mariolu. Thousands of fish ... A perfect springboard for diving and many caves to explore on the south wall.

The beach of Cala Mariolu can be reached daily, from May to September, with departures from the ports of Cala Gonone, Santa Maria Navarrese, Arbatax, La Caletta and Orosei. The service is guaranteed by transport consortium and companies through vessels for passenger traffic, with capacities ranging from 100 to 300 people. Another option is to rent a boat (rubber dinghy or boat) with or without a skipper; the maximum capacity is 12 people for charter services and about 8 people for rental without a skipper. Cala Gonone is located in the center of the Gulf of Orosei and it's the favourite departure to visits the coves. In fact Cala Goloritzè, the farest beach from Cala Gonone, can be reached in about 40 minutes. During the journey you have the chance to admire or stop in all the most famous coves. However, if you want to trek to Mariolu, Cala Goloritzè or Biriola, Baunei and Santa Maria Navarrese are more suitable for the stay.

Recommended location for departures by sea 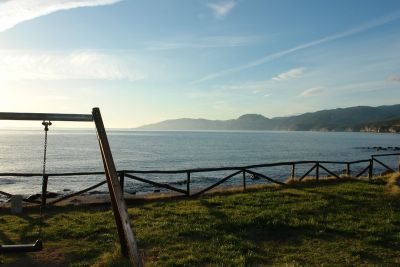 Located in the centre of the Gulf of Orosei, the port of Cala Gonone has long been the only reference point for the tourist services of the gulf.
Cala Mariolu is about 11 miles from the port and it can be reached in 30 minutes at 20 knots speed. Cala Gonone is the ideal starting point to sail towards the coves, thanks to the reduced distances and to the usually favourable sea during the afternoon return. Starting from Cala Gonone you will have a complete overview of the coast of Baunei, through a succession of beauties extending from Cala Fuili to Cala Goloritzè. 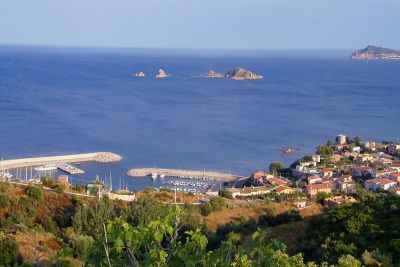 Santa Maria Navarrese is the touristic hamlet of Baunei, that manages over a third of the Gulf of Orosei (from Capo Monte Santo to Cala Luna). The southern part of the Gulf is also called Costa di Baunei. In Santa Maria Navarrese you will find excellent vessels for passenger traffic and charter boats (some of them with lunch on board). The port is about 12 miles from Cala Mariolu , reachable in 35 minutes at 20 knots speed. Baunei is undoubtedly the ideal place where spend your holidays if you want to reach the coves by foot; many of the trekking routes have been lately secured by the municipality.

"Sardinians, a sailors people" ...not really, especially in the recent past. Since the Middle Ages the coastal depopulation and the malaria enduring in the river sections prevented the growth of the fish economy in the Sardinian central coast until 1950. During the post-war period came to Sardinia many fishermen families from Ponza; the fishing (especially of lobsters) grew strongly in the Gulf of Orosei until 1970s, when it was gradually replaced by the tourist services.
The high cliffs from Cala Cartoe to Capo Monte Santo were hard to traverse by land: the only ways were through the long canyons of the Ilune and Sisine streams. For this reason many caves and beaches of the southern part of the Gulf of Orosei were unknown to most and their names and meanings have been lost over time.
Cala Mariolu and Cala Gabbiani are divided from the promontory of Punta Ispuligi and their shoreline has the same morphological composition. The "Ispuligidenie" (snow fleas) original toponym derives from the white calcareous grit of these two beaches. The pebbles can be found both in the southern part of Ispuligidenie (Cala Gabbiani) and in the northern part (Cala Mariolu); the quantity varies over the years depending on the winter storms.

Once a friend, returned after three months in South America, said me: "I'm going kayaking to spend a night in the Gulf".. He left early in the morning and decided to stay in Cala Gabbiani.. The day after I asked him how was the night: "Cool" -he replied- "but the seagulls were having a beach party and it seemed they wanted me for dinner... I slept inside the kayak covered by a towel up to my ears!"
based on the "Francesco Z. travel diary".
I often saw an unusual presence of seagulls in the southern part of Ispuligidenie, but I never paid specific attention (until my friend's night) to this fact.
From the central wall of Cala Gabbiani gushes a lot of fresh water. Depending on the year, it is possible to see the entrance of the long cave inside the cliff, where can be found fresh water. However, we don't recommend going inside because the ceiling is unstable. 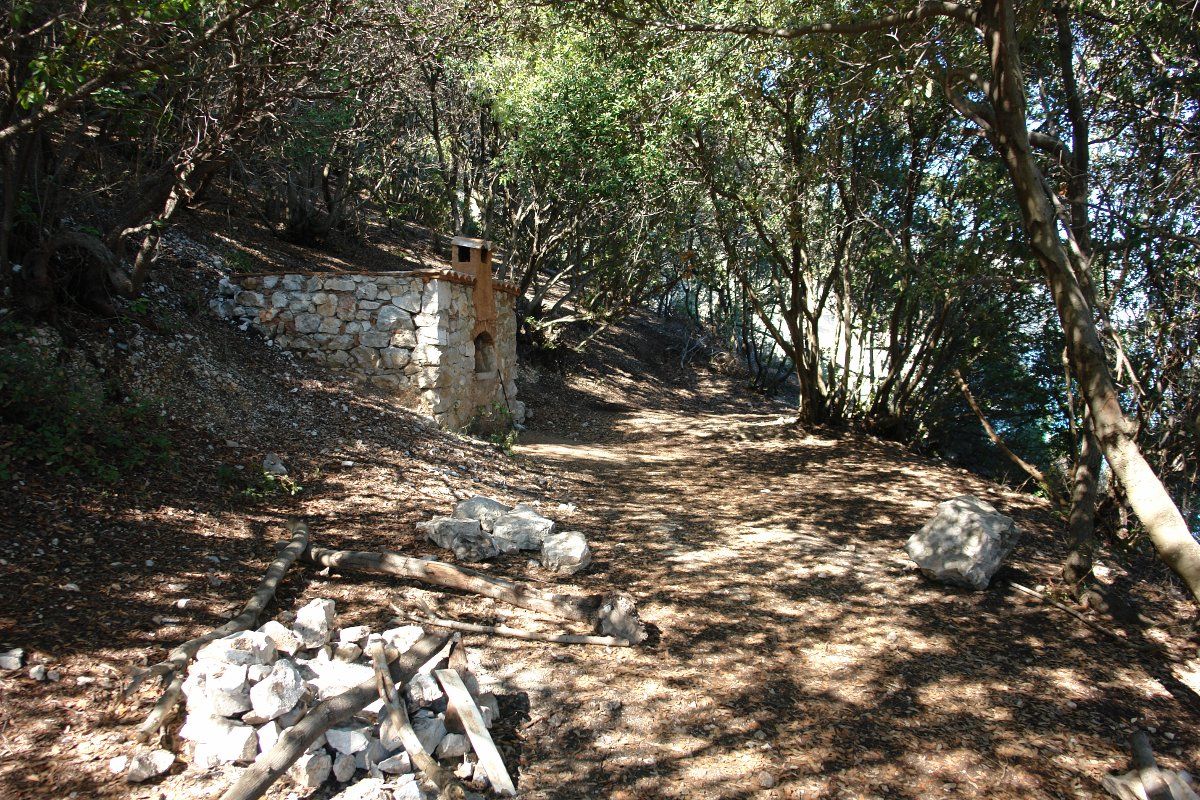 ..back to the the charcoal burners' time

The economic partnership between inland and coastal areas was consolidated since the early twentieth century, with the arrival of the charcoal burners from Tuscany. These workers, which remained far from home for several months, produced charcoal and stowed it in large vessels. Along the coast can be found traces of charcoal kilns and deposits. Just above Cala Mariolu there is a food cooking oven, built around 1950 and renovated by the Baunei administration in 2013. It can be seen in the final route stretch that leads to the beach. 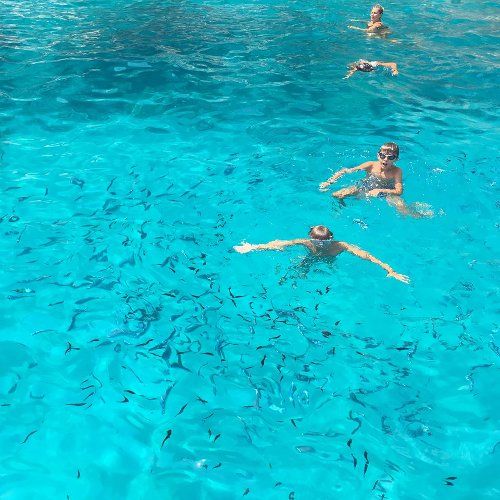 In the Gulf of Orosei there are many areas rich of "Sparidae" species, which prefer the waters of the northern part of Cala Mariolu. You'll can swim among them even close to the shore: they are so used to the human presence that they'll come to eat bread directly from your hands. Try it!

Swimming in Cala Mariolu you will notice some areas where the water temperature decreases considerably (up to 10 degrees less). In this case you are surely swimming over a karstic freshwater spring, a recurring feature in the Gulf of Orosei. The water comes from the heart of the marine Supramonte; when the rain become abundants, you can notice some real freshwater volcanoes at depths greater than 10 meters. The fresh water combined with the calcareous rocks produces the turquoise colors and light effects typical of the Gulf of Orosei.

Can you spend the whole day in Cala Mariolu?

If you want to spend the whole day in Cala Mariolu, the best solution is to rent an inflatable boat without a skipper, because Charter services and traffic boats usually stay max 2 hours on this beach. Another option could be the taxi service, but its cost is usually equal to the dinghy rental. We suggest to rent a boat if you want to spend more time in Cala Mariolu.

What is the best time to visit the beach?

The best time to visit Cala Mariolu and the other beaches of the Gulf of Orosei is from mid-June to early July, thanks to the pleasant water temperature and the length of the days. In spring the water is still cold and in autumn the beach is shadowed from 15:00. During peak season the high flow of people could affect your experience negatively. For this reason, since summer 2018 has been set a closed number to this beach.

When can't we go there?

Cala Mariolu can be reached by foot all year round (with appropriate physical conditions). The sea services usually start before Easter and finish around mid-October. We don't suggest the approach to the beach with north-east or east winds, that make difficult the landing operations (especially for smaller vessels) due to the undertow.

How long the beach remains sunny?

The beach of Cala Mariolu reaches its maximum at the summer solstice on June 21st, when it is possible to sunbathe until 4.30pm. Over time the shadow will occur gradually faster. The sun disappears behind the mountains as early as the middle of the afternoon. In the Gulf of Orosei only the beaches of Cala Luna e Cala Sisine remain sunny all day.

Sport fishing is prohibited within 500 meters from the shore of Cala Mariolu and in the entire area from the the beach of Ziu Santoru to Capo Monte Santo.

Are there beach services?

The mooring assistance service, managed by the "Costa di Baunei" club, is operating in Cala Mariolu during all summer. From mid-June to mid-September there is a small kiosk with bar products (fresh drinks, sandwiches and ice cream). Snorkeling and diving enthusiasts can take advantage of the diving service, also suitable for novices.

Is it the most beautiful beach in the Gulf of Orosei?

Mariolu is the most beautiful beach in the Gulf of Orosei, although there are corners of the coast and "Secret Places" that are equivalent as beauty. The peculiarity of this beach is that it contains many peculiarities of the gulf in a few hundred meters of coastline. The limestone grit shaped by the waves .. the diving area for those looking for fun ... a multitude of fish and inlets for snorkelers .. The silence broken only by the sound of imperial crows and queen's hawks (only in low season). It must be considered that living this experience in the low season is completely different from experiencing it in August.

Discover the "Secret Places" of the Gulf of Orosei.
Just click to follow us on our page

Info - Municipality of BAUNEI:
0782 610823
Contact us
How to reach Cala Mariolu by sea? Click the button below to fill out the request form and select the excursion by boat or dinghy. We'll reply you soon
Departure from Cala Gonone
Privacy, Termini e Condizioni